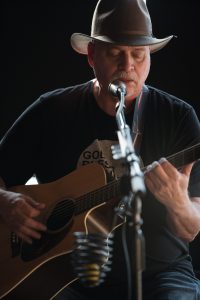 Americana/Folk Artist of the Year” (2016 and 2018 Queen City Music Awards), Mitch Hayes is an award-winning singer/songwriter, recording and national touring artist from Charlotte, North Carolina who now calls Oklahoma home. His music is as eclectic as the creative influences that have helped to shape his writing through the years, classic singer/songwriters such as Bob Dylan, Neil Young and John Prine, to name a few. Mitch’s lyrics will take you on an emotional journey through timeless themes of love and loss, joy and sadness and social consciousness. In his songs, the listener will hear elements of Folk, Rock, Country, Blues, and even a little Bluegrass.

What The Press are saying:

(Read the articles below in full, in the Press Kit section under “Reviews” in the drop down menu)

“Mitch & Erin Hayes hailing from North Carolina on their Chasing the Pacific Sunset Tour, are a brilliant duo with an engaging vibe. Their sound is contemporary Americana with a country/folk twist at its best. This duo’s acoustic setup, flute and terrific vocals make for a great afternoon of singer-songwriter compositions…At the end of every tune you’re saying to yourself, “that was a great song.”…at the end of the set, you have said that about every song” (MUSIC CONNECTION MAGAZINE).

“Where do great songs come from? Author, Fredrick Buechner, says his prose comes from the place where he dreams. John Prine compared songwriting to fishing as he refers to ‘catching’ songs. For North Carolina singer-songwriter, Mitch Hayes, his best songs come from such a deep place in his soul, he feels like more of an instrument than the author of the songs he writes” (NO DEPRESSION – THE JOURNAL OF ROOTS MUSIC)

To date, Mitch has released three CD’s and will be back in the studio in December of 2021 to record a fourth. In 2017,  two of Mitch’s songs from his CD “Heroes” made the Top 100 of the respected Friday Morning Quarterback Chart: “All Fall Down” peaking at #23 and “Look at You” at #40. When one considers Hayes was competing for airplay with such household name artists as Adele, John Mayer, Bruno Mars, and Ed Sheeran, this is impressive. “All Fall Down” was also submitted for Grammy consideration in that same year.